Leslie Cooper, a teacher at Saint Andrew’s School in Boca Raton, Florida, shares a story about a learning experience that took place in her junior kindergarten classroom. It’s a beautiful example of child-led, community-based learning (the kind we believe in at Sunflower!) in a more traditional classroom setting.

There was a monumental leap in learning in our classroom, recently, for a child named Brian* who generally takes more than one pair of eyes to guide his demeanor in the classroom.

On a recent Monday, Brian joined a group of boys sitting at a table, drawing on write-on, wipe-off boards (a big surprise from this group, who were usually builders). I moved past the table without speaking, and noted a lot of house shapes being drawn.

A little guy named Terence* had been drawing witches and houses with great dexterity and representation since the first day of school. Terence’s education prior to coming to our classroom took place in Madrid, Spain, where he attended preschool and took English lessons with a “professor” in Madrid before his parents decided to move back to the United States. His parents are supportive and funny and make you feel as though you are being hugged when they smile at you. I knew weeks ago that Terence would be an inspiration to the children in the classroom.

During Halloween, Terence had moved on to Greek Mythology and stories of Medusa, Zeus and Persephone– stories his parents share with him at home. He also had added book writing on file folders to his repertoire, and the entire group learned to share mythology stories with other students who brought the stories of Greek superheroes home to their parents. Terence was making “story boxes” for some of the other children, as well. (What is a story box? Terence took any brown corrugated box he could find at home and created characters on paper and scenery that he would color and cut out, place inside a box, write a child’s name on it and gift it to them in class the next day.)

On this particular morning, Brian’s building buddies were fortuitously at the writing table, engaging Terence in talk and taking his storytelling lead. Brian would have loved to build with them (my guess), but in his effort to stay part of the group, he joined the writing table instead.

Brian usually rushed through whatever choices he would make during morning play. He’d move from one area to another like a firefly on a moonlit night. We always knew where Brian had been because he left a wee bit of chaos wherever he was. This morning was different. Brian was at the writing table for at least 15 minutes, and he drew his first picture this year that we all could decipher without explanation.

A fifth grade helper named Adam* was at the table talking to the boys. (At Saint Andrew’s lower school, where I teach, the oldest children in the school– the fifth graders– are assigned to join a junior kindergarten class for a month each morning until their school day begins. This is a voluntary position, and Adam was excited to spend the first part of his day with the youngest children.)

As I circled by the table a second and then a third time, I asked Brian if he would like to share his story. We often do story dictations in the classroom for children who are not yet writing at all. He replied affirmatively, and I gave the helper a paper and pencil and asked him to write the story that Brian would share with him. I purposefully did not take the dictation myself knowing that Brian would open up to the fifth grader in a way he would not open up to me–  Brian is a kid’s kid…the sixth of six! He has four brothers and one sister.

I took a picture of Brian with his drawing. The following is the first storytelling adventure for Brian this year: 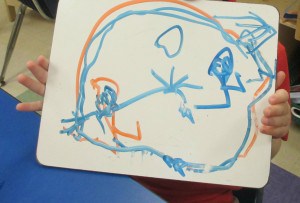 This is Brian’s very first attempt to play with words and drawings– a new “language” for him to begin to use to make sense of the world around him, and to express his ideas and love of play and learning.

The best teaching is in the style of listening, observing, supporting and facilitating. Watching learning shine in the heart and mind of a 4-year-old is better than almost any other feeling in the world!

My email signature is “childhood is a journey, not a race.” It has been my signature for many, many years… and that is why I am quite sure that I will never give up the journey or grow too old to still see the BIG IDEAS in small moments and continue to be in awe of each one of them.

*Names have been changed.

Leslie teaches junior kindergarten at Saint Andrew’s School in Boca Raton, Florida, and is a member of the Sunflower Creative Arts Advisory Board. She has almost 30 years of teaching experience with young children. Previously, she helped build and wrote the curriculum for the Jewish Early Childhood Center in Boynton Beach, Florida– a Reggio-inspired program– and served as the Director for three years. Her passion is framing curriculum and implementing activities that are based in the most current brain research for young children.