Reading on their own timetable Both of my children, now young adults, went to Seedlings. I loved the fact that there was no academic curriculum, that they spent all morning in creative play. I knew that between the upcoming twelve years of school and four of college (and, perhaps, grad school), they’d eventually get plenty of instruction in math, history, science, and, of course, reading.

Others around me, however, were more alarmed, especially about the lack of formal reading instruction. “You mean he isn’t taught to sound out letters?” one girlfriend sniffed, pointing to the preschool reading report card documenting the alphabet prowess of her own three-year-old. “The main reason I send my daughter to preschool is so she can learn to read,” another insisted.

I easily brushed off the need for my kid to be a preschool-aged superstar, and I knew I was sending my son, and later my daughter, to a magical place. But when a relative asked me, “Aren’t you worried they’ll get behind?” I admit it triggered a small, nagging concern. After all, what mother wants their child starting first grade already feeling behind? But I trusted Susan’s soothing that I shouldn’t worry.

With my son, this turned out not to be an issue. Somewhere around 4-1/2 years old he realized that the Dr. Seuss books read to him from the TV videos exactly matched the text in the books in our home; he started following along. Within a few weeks of running his finger along with the person reading out loud, something clicked. Soon he was reading Seuss books without the prompter, followed soon after by other books he’d never heard. I was a helper mom in Seedlings one day when he asked Susan if he could read the book she’d just started to the group. Susan figured he knew the book by heart, and was amazed when she realized he was actually reading. 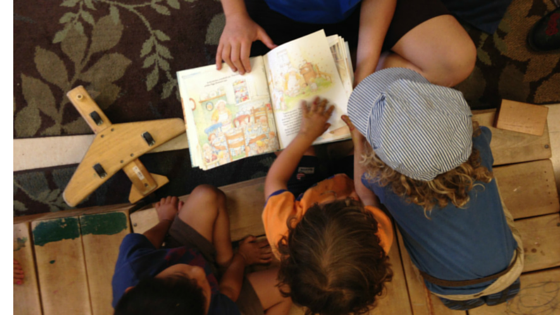 Exploring books together at Seedlings.

This contrasts markedly with the experience of my daughter, who came to Seedlings four years later, and spent her entire three years there (and her time at home), including her kindergarten year, drawing, laughing, building, creating and dancing, as well as listening to stories–but having absolutely no interest in reading them. I knew that Seedlings was one of the best experiences of her life, but I was a tad apprehensive when she started her Montessori first grade at age 6-1/2 way behind the other kids. “She doesn’t even know the sounds the letters make,” her teacher marveled to me one afternoon at pickup. (I’d tried to teach her this several times over the years, but she’d always run away.) Fortunately, her teacher was a dream, and didn’t make my daughter feel inadequate. By the end of the first quarter, with tailored instruction (more possible in a Montessori environment than others), she was reading at the same level as the other kids; she soon surpassed them.

I tell this story to parents of young children whenever I can, so they can relax about their own kids’ lack of formal instruction. But the best part of this story is the coda. My very bright son–the one who, unprompted, taught himself to read–thrived in college and is now off to a booming career in computer engineering. But he is not a book reader. Aside from requirements in school, he’s probably only read a few books total in recent years. My daughter, however, is a reading machine. He room is buried in tomes; her Nook overfloweth. She typically burns through several books each week–everything from topical nonfiction to fantasy to history. She’s heading to Paris this fall, and instead of reading one guidebook she’s tearing through numerous histories about each locale. The girl who didn’t know her alphabet at six years old is the one who, ironically, now helps to keep bookstores afloat.

Meryl Davids Landau is a freelance magazine writer and novelist. She lives in Boca Raton.