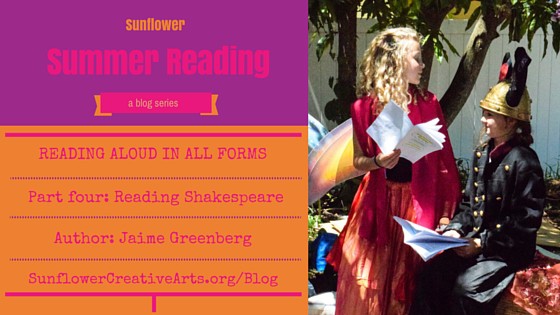 Sunflower Summer Reading: Long summer days are the perfect time to get lost inside a book! Join Sunflower throughout the summer, as we explore reading aloud in all its forms and benefits.

This post is Part 4 in the series. Read Part 1 here: Read me a story? As you wish. Read Part 2 here: Audiobooks: Learning to listen Read Part 3 here: Reading Aloud with Interaction: You can’t mess it up

I’ve always been in love with words.

Not just reading them in my head. I love the out-loud sound of them: how I can take a big fat bite of the toothsome ones, tickle my tongue with the sparkly ones, and savor my favorites like slow-melting pieces of peppermint candy.

True, not everybody wants to eat their words like I do. But experts agree that active engagement in the reading experience (knife and fork optional) is the key to creating skilled, and interested, life-long readers.

One of the best, and most fun, ways to get kids actively engaged in reading is through drama.

For pre-readers, drama might take the form of acting out a story, like “Chicken Little,” that a parent or teacher has read to them, imagining they’re one of the characters. It’s a chance to jump inside the story and play with all its parts– maybe change it up a little– rather than merely listen to it.

For older readers, reading stories and plays aloud– and acting them out– helps master the finer skills needed for true literacy. It also encourages a love for the sound and rhythm of the words.

We see this firsthand at Sunflower in our We Love Shakespeare! class.

To love the language

Yes, at Sunflower we really do teach Shakespeare to eight- to 13-year-olds.

They learn through theater games, improvisation and class discussion. It’s a reader’s theater style class, so actors perform with scripts in hand (although they often do memorize chunks of lines for fun). 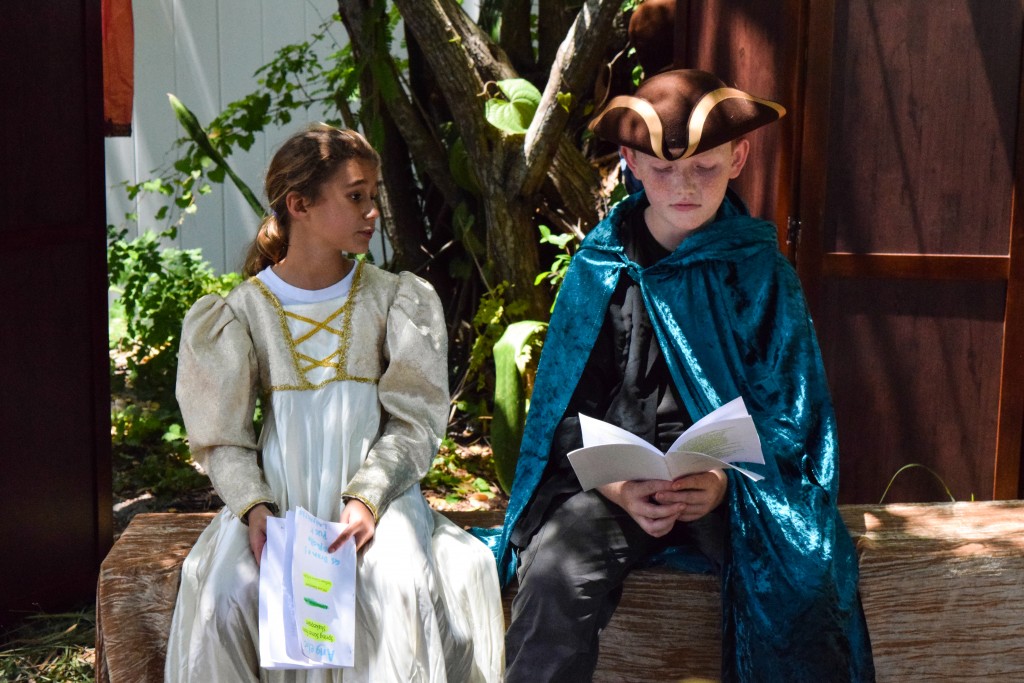 My daughter, Suzie, has been part of this class for the past two years, and she says adults’ reactions when she tells them about it are always interesting, “They are usually really shocked,” she said. “Sometimes they don’t really know what to say because they don’t know any other 10-year-olds doing Shakespeare.”

But why not? Love him or not, The Bard’s plays have heavily influenced the culture of Western civilization for the past 450 years, and his language, characters and themes pop up everywhere from popular movies to classic literature.

Plus, his writing’s not too shabby either. If you can get past the fact that Shakespeare’s characters don’t always talk the way we do.

Which is where reading aloud comes in handy. Sometimes it takes speaking the words to hear the music in them, the sound of the language, the living beat of it.

“I like how Shakespeare uses words that we wouldn’t usually use,” Suzie says, “I like the way the words sound. He uses lots of metaphors, and I like his use of different contractions that we don’t use.”

Her favorite quote is from Macbeth, “Poor bird! Thou ‘dst never fear the net nor lime the pitfall nor the gin.”

Suzie has performed the scene that line appears in twice for audiences, so although it was never her line, she’s heard it repeated, and discussed, many, many times.

“It’s a metaphor, and I actually understand what it means,” she explains. “The mother is comparing her kids to poor innocent birds.”

Suzie has a deep understanding of her favorite quote, as she should– because meaning is entirely the point.

After all, what good is merely decoding words, no matter how sweet their syllables, if you don’t understand the meaning behind them? This skill, known as fluency, is key to literacy– but it requires a lot of practice in reading and re-reading the same material over and over. Which sounds potentially pretty boring, unless that practice is also play practice. Performance is a great motivator for getting the meaning of a scene just right.

Sunflower’s Shakespeare class not only reads their lines, they talk about what’s going on in the story, between the lines.

They discuss different interpretations of each scene, the motivations of each character, what happens when you emphasize different words and try different line readings. They make Shakespeare’s words their own words.

Drama involves reading, yes, but it’s also a whole-body experience. Actors suit their actions and emotions to the words in the script. Often they use their whole body to take on an emotion.

“I can’t just sit there and read Shakespeare,” Suzie says, “I might be bored out of my mind. But because we get to act it out, it’s fun. And I understand what I’m saying better because of what I’m doing.”

It’s a comprehension technique she wishes she could use more often.

“Shakespeare is easier to read than Harry Potter because you can act it out,” Suzie points out, referring to her other favorite literary works, known for their complex plots and creative vocabulary. “Harry Potter is much better to have someone read to you because there is a lot of stuff in it still that I don’t understand when I read it in my head.

Acting out helps you understand the story better. If I could act out Harry Potter, then I would have an easier time reading it out loud.”

For an explanation of how drama supports all aspects of literacy development: “Doing” literature: Using drama to build literacy

Worth checking out: How to Teach Your Children Shakespeare by Ken Ludwig

Jaime is Communications Director at Sunflower Creative Arts. She’s a mom and proud advocate of play, wonder, and the joys of just being a kid.