My favorite part of Sunflower’s annual Ice Castle Festival & Play Day, which took place earlier this week, is simply watching everybody play. And I don’t just mean the little kids. As I made my way from one end of the festivities to the other on Sunday, taking photos (my official Ice Castle job), I saw babies giggling and preschoolers playing. But I also saw teens climbing trees. I saw moms playing kickball and dads building forts out of cardboard boxes.

One of the most popular play activities of the day, enjoyed by children and adults alike, was one that Sunflower staff and volunteers never even planned: cardboard box sledding.

A problem that needed solving
It all started out at last year’s Ice Castle Festival: it seems you can’t have a winter festival without sledding, even in South Florida. We had piles of cardboard boxes set up for our Big Build activity, and the Patch Reef Park meadow– where we’ve held our Ice Castle event for the past three years– has these amazing steep hills. It didn’t take long for kids to put two and two together.

It turns out you don’t need snow to sled down a hill. But the equation for perfect cardboard box sledding is not quite as simple as grass + gravity. Kids discovered last year (and I noticed many kids– and adults– rediscover this year), cardboard alone does not slide very well. A cardboard box loaded down with laughing, screaming children may not slide at all without a little help.

Children are born scientists and experimenters. And because they were reallly motivated to get to the whee! part, the kids at Ice Castle made it part of their play to figure out the best way to make that happen. 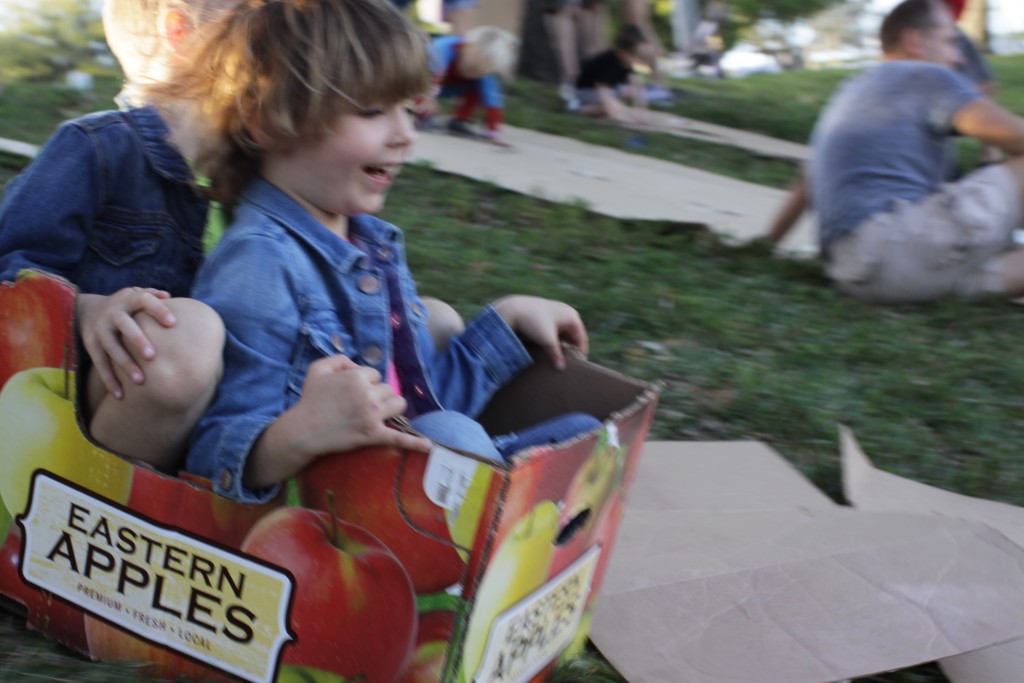 Last year I watched two different groups of kids problem-solve as they played. This is what they came up with:

Solution number 1: Line the sled path with extra pine straw to make a slick sliding surface. I didn’t catch it on this video, but the kids tossed armloads of additional pine straw onto the sled path before sliding.

Solution number 2: Make sort of a luge track with flattened cardboard boxes. The trick is to tape them together so the track stays intact. 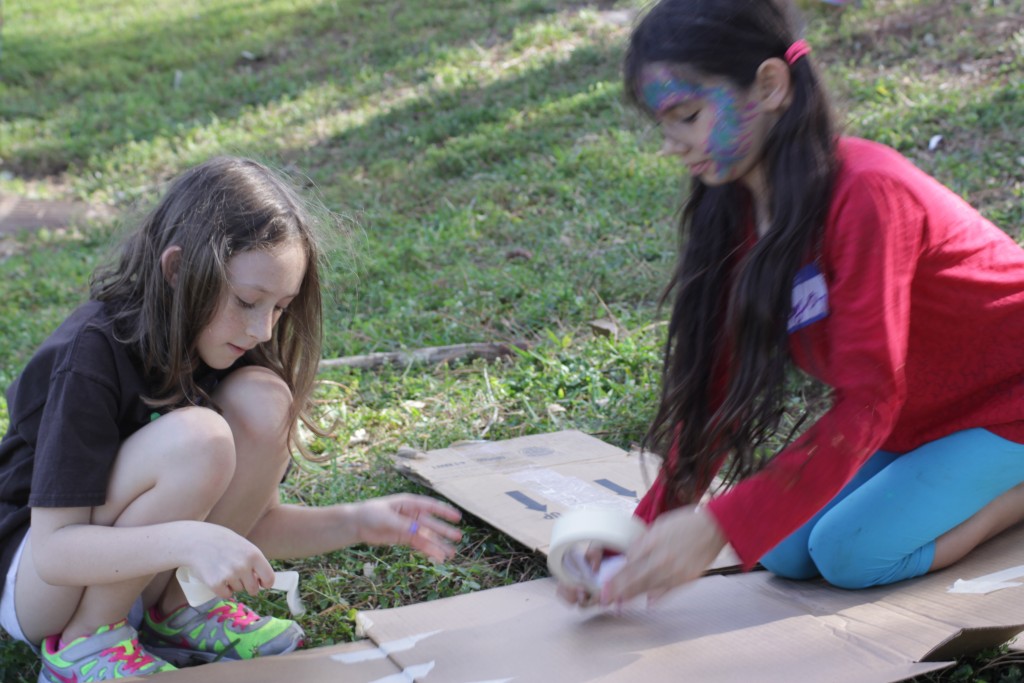 Taping the track together.

This year, thanks to some experienced veterans (kids who’d been involved in last year’s Ice Castle sledding adventure), the initial problem-solving phase went a lot faster.

Some kids even figured out how to make the grass work for them, with a little finesse.

Before long, there were at least four cardboard sledding stations set up on the hill. Some stations even had lines. 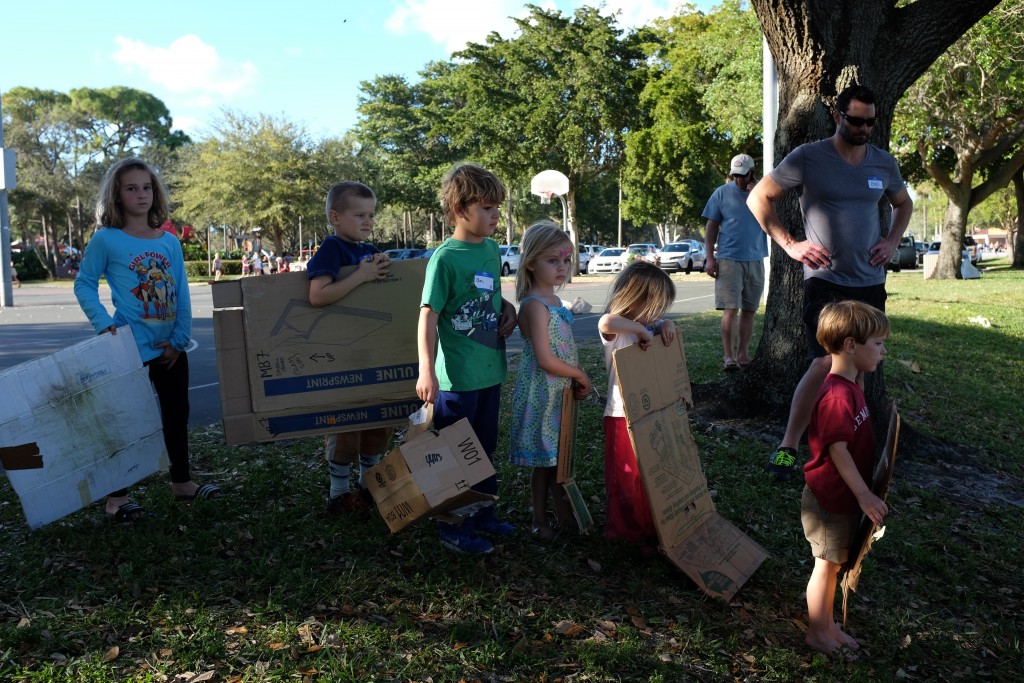 This must be a good track!

And I noticed more than a few adults get in on the fun by “helping” their kids slide. (It’s okay parents, you can slide too, all by yourselves! Nobody’s judging!) 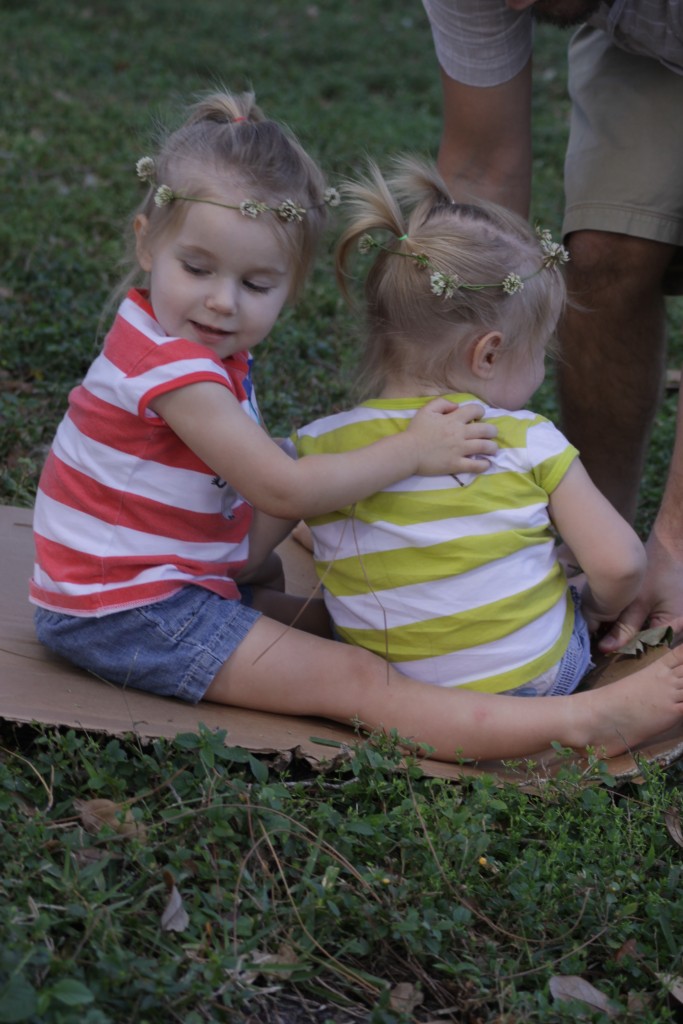 Maybe all this is not such a big deal. Kids have been playing with cardboard boxes since the beginning of disposable packaging– and rolling down hills since the invention of gravity. (That is to say: forever.)

But, in today’s world, it is a big deal.

To have an afternoon completely devoted to play– no hard-and-fast plans, no agendas– when cardboard boxes and bubbles, kickballs and tire swings, are simply… enough? That’s about as special and rare as building an ice castle on a 75-degrees-and-sunny, shorts-wearing South Florida day.

But, you know what?

Together, on Sunday, we made both of those things happen.

Thank you to everyone who came out to Sunflower’s 22nd Annual Ice Castle Festival & Play Day this year to help us Remember Play!

Tell us in the comments, below: Which part of this year’s Ice Castle Festival & Play Day will YOU remember most?

Jaime is Communications Director at Sunflower Creative Arts. She’s a mom and proud advocate of play, wonder, and the joys of just being a kid.