Give them time (a story of watercolors and preschooler theoretical physics)

Posted by Meade Peers McCoy | Being a preschooler, Learning Through Experience

I was walking through the room headed off to do something important somewhere else, with no intention of stopping or even lingering to listen. But something about the intensity of their conversation drew my attention, and I did stop and linger to listen to them: a decision I am very thankful for, as it opened my eyes to an unintended side effect of open-ended child-led play and process-based art, and the intersectionality you see in child-led learning environments. I saw something I not only never expected to see, but something I would not have considered possible mere moments before. 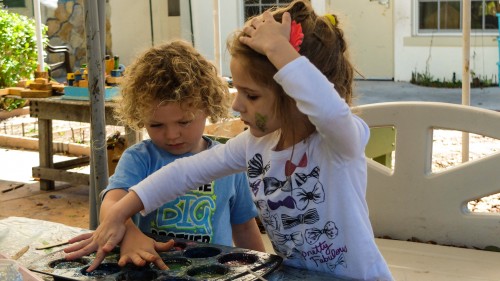 Almost every day during Seedlings there are watercolor paints set out somewhere. There are no projects to do, no guidelines to follow, and very few rules about what you can and can’t paint. Some days these paints will just sit on the table all day without being touched, other days groups of children will come and go, and then there are the days that one or more children will spend practically their whole day immersed in those paints.

Preferring human bodies as painting canvases isn’t surprising, after all they move and change. It’s living art. Paint in motion.

That day, as I stopped to listen to the three young girls chatting as they painted each others’ faces and arms, I thought that they were simply enjoying the beauty and wonder of creating living art. It turned out I was selling the situation and the learning experience very short.

As I stood there, one of the girls looked up at me with a huge smile and told me that they were painting today (a fact that was hard to miss, given the amount of color that had already been spread around, but I smiled and nodded). And for a minute they happily continued to paint until one of them, presumably fearing I might try and dissuade them from covering every available inch of their exposed bodies in brightly-colored watercolor paint, looked at me and said, “don’t worry, it washes off with water.”

And that is when it happened: the leap in learning or mental exploration. It was cause and effect, basic physics and philosophy all wrapped up in one conversation between preschoolers.

After telling me that the paint would wash off with water, one of the girls observed that it was interesting how what made the paint work (it was dry watercolor), also made it go away. This led to a five+ minute conversation about the nature of paint and water and how the paint needed the water to exist AND to be washed away. They were exploring the idea in a way I never would have imagined a preschool child being able to understand, let alone come up with themselves. So I stood there listening and marveled about what children can discover about the nature of the universe if you just give them the right tools.

Learning is the new skill. Imagination, creation and asking new questions are at its core. – Sugata Mitra

In the months since I witnessed this conversation, I’ve considered what about the environment at Seedlings set the stage for that level of theoretical exploration among 3-6 year olds. The conclusion I’ve come to is time– time to keep exploring an idea long after the adults assume they have learned everything they can from an activity. Those young girls had spent countless hours, over many months, painting their bodies. The paint was put out day after day, just sitting there waiting for them to use it or not. If we hadn’t done that, if the paint had only been out every so often, would they have been able to play, explore and learn as much about the nature of watercolor paint as they did?

“The repetition in play may sometimes lead parents and other observers to think that nothing new is being learned. but if that were true the child would stop and do something else.” – Peter Gray 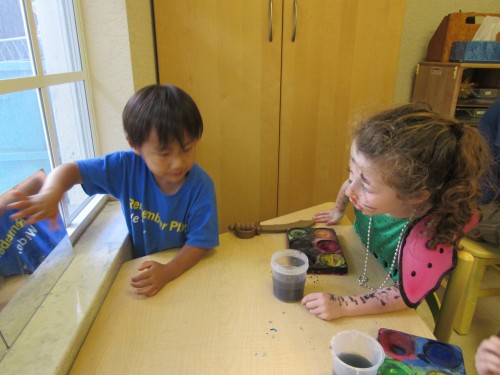 And now imagine if we had only let them use the paint on more conventional surfaces. Would painting on paper have given them the necessary data to form their hypothesis about paint being created and destroyed by the same means? Water.

But with the time and the freedom to use the paint however they wanted or needed to, they discovered some amazing things about their world and the laws of the universe. And they got to create beautiful living art in the process.

Meade is Director of Special Projects and Strategic Initiatives at Sunflower Creative Arts, which means that she gets to learn something new every day. She helps build websites, takes pictures of children at play, bakes yummy things and occasionally writes blog posts about what she is learning at Sunflower.